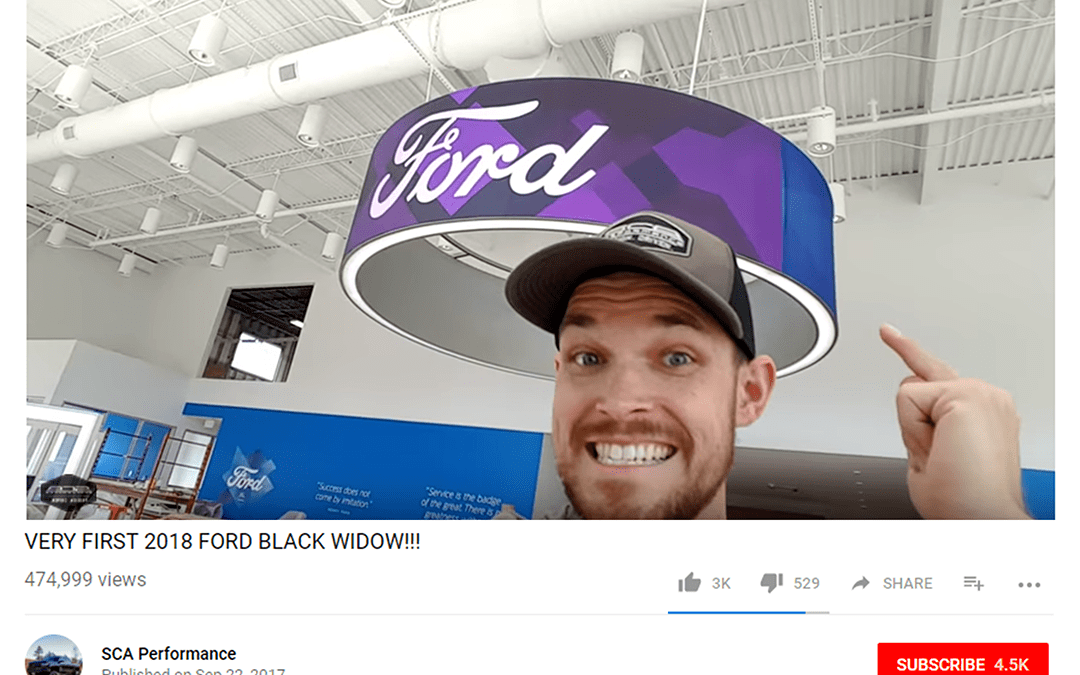 Ends up…it’s not only angels who use halos. A recent Youtube discovery was made in which SourceOne’s Ford Motor Company Halo Project was spotted in the wild. With nearly half a million views for this single video ― we definitely consider it our brush with “internet fame.” The SourceOne-related segment gets 30 seconds of mention [2:44 – 3:14], which ― in internet time ― translates into the traditional 15 minutes of fame.

This growing internet fame comes from Drew, Youtube vlogger and host of the videocast series, “The Passion Driven Life Project” – with 4.5K subscribers, sponsored by SCA Performance (www.scaperformance.com). The PDLP programing focuses on new Ford product releases, various modifications and aftermarket products and, of course, the beauty of horsepower. For episode #066 in which SourceOne’s composition is shown, he’s visiting a Ford dealership, Town and Country Ford, of Pell City, Alabama, to reveal the 2018 Ford F150 Black Widow!

About the Halo Project: In Autumn of last year, SourceOne worked closely with Leyard (www.leyard.com) to collaborate on a project commissioned by Ford Motor Company to create an indoor visual merchandising system dubbed “the halo.” This digital display system ― shaped like a halo ― uses Leyard displays and SourceOne’s exacting engineering and fabrication to achieve what seems impossible ― a balanced, floating, curved, rich media display capable of broadcasting information and messaging to customers visiting Ford dealerships across North America.

A combination of SourceOne’s engineering and metal fabrication resulted in an outstanding design from which two initial fixtures were made. (Interesting fact: the second ever halo produced now lives in Australia!) In advance of a visit to SourceOne’s Lincoln campus by Ford Motor Company executives, SourceOne’s project engineer (and Halo project manager), Jon Hoffman, arranged to “borrow” a brand new 2018 Ford Mustang to park under the halo to…you know…set the scene properly for the visiting guests.

“Since this was a simulation of an install – rather than use of the actual attachment system designed for the install – I really took a big breath parking this $65,000 mustang under a 2,000 lbs. display. The entire structure is 12.8’ in diameter and 36” in height. Designing for balance was a factor, since one half holds the weight of the Layard displays and the other half is static fabric. I really enjoyed designing this project, and it would seem the right balance was struck, as Ford is in the process of outfitting all licensed dealerships in North America with the halo we designed.”

As for Drew, the host of PDLP, when he first sees SourceOne’s structure ― comments: “THAT is INSANE!” (at video mark: 2 min. 47 sec.) in the video below. We at SourceOne agree with him!